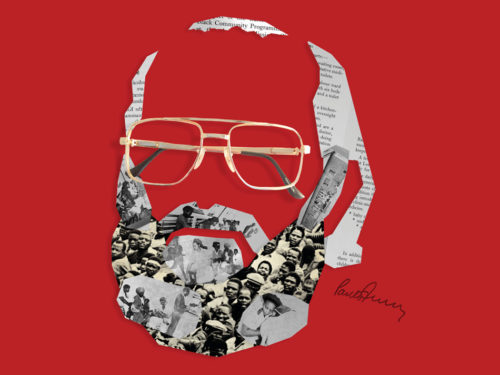 What— and more importantly who— is at stake in a top down revolution?

Tyrone Williams’ short (and very good) essay “The Human Teacher” (which appears in UIP’s Poets on Teaching) is a provocative examination of the teacher’s relationship to knowledge and the role institutions play in education. One of his main premises is a critical differentiation between education and the acquisition of knowledge. Knowledge can be obtained without a formal teacher (insofar as we don’t consider an author a teacher), and education is on its face a systematic presentation of knowledge in a way that best facilitates learning. More subtly, however, education is a process of socialization.

The dense (which is to say poetic) essay ultimately affirms and justifies the need for the human teacher— a point crystallized in the following sentence:

Education can never fully rupture from the teacher. The furthest extent to which a rupture can take place is in the interiorization of the teacher and the education— not so much rupture as a kind of ‘going beyond.’ And this point of departure must necessarily be arrived at by some education, some teacher, which can never be undone or made irrelevant.

Williams contrasts this with conceptions of history as being capable of clean, complete ruptures, which he deems problematic by linking such conceptions to wars and conflicts of all kinds. This is an odd and unseemly metaphysical argument, but the general sentiment is one I agree with: History, like education, can never wholly separate itself from what preceded it. To think otherwise, he goes on, is to venture into religious territory and notions of transcendence, and is ultimately incompatible— or at the very least inapplicable— to the question of secular education that we’re primarily dealing with.

The critical difference between acquiring knowledge and taking part in education is the social aspect, which brings to mind bell hooks’ notion of engaged pedagogy (which heavily stresses this socialization component) that she develops in Teaching to Transgress. bell hooks’ approach to education is constructive in that it very intentionally refocuses the scope of education from ‘just’ the acquisition of knowledge toward a more holistic, socializing process of liberatory development. This is a necessary perspective, even when her approach comes off as idealistic or radical, and is a thorough and valid criticism of priorities in the education system.

This question of socialization is of course pertinent to contemporary discourse. Steadily increasing emphasis on socialization processes— that is, how to mould students into moral members of society— has naturally led to its increased scrutinization. As we approach this type of questioning, we’re inevitably led to the same sort of inquiry that Williams poses to preface his argument: “I am concerned with the alleged objects of teaching.” What exactly is the purpose of school? Or rather, what is the purpose of education as a socializing process as distinct from the mere acquisition of knowledge, and what role does the school play in this? These are hotly debated questions, specifically because they are questions of fundamentals. As critical theory has made its way into the mainstream discourse, our institutions and the capitalist framework that moulds them and us are openly, rightfully (and ideally productively) questioned.

A particularly crucial aspect of this critique, and one which warrants sustained interrogation, is to what extent we should impose revolutionary political projects (which are at their core socialization projects) onto students. I worry that our tendencies toward idealism when developing theory and the urgency with which we pursue political goals might lead us to overlook the reality of the world we are ostensibly preparing students to enter. At what point are we doing them a disservice, treating them as the shock troopers of a professed revolution in education, with hopes of revolutionizing society at large? Pragmatism typically connotes a kind of reductionism, but I feel that a need for a pragmatic approach is the most succinct way of explaining my hesitation to these heavily ideological approaches.

And this isn’t to say an ideological approach is inherently bad, or that a non-ideological approach is even possible. To accomplish a self-professed revolutionary practice necessitates a strong and comprehensive ideological framework. But this is exactly the intrinsic hazard here. And how to go about such a revolution is critically important not just for the success of the implementation, but because there are real students’ lives at stake— students whose parents may or may not have any idea that their children are involved in a revolution in education, in socialization, and students who certainly aren’t meaningfully aware of it themselves. Can we in good faith afford to approach this process with any sense of urgency that might detract from a measured, if slow, implementation?

At the very least, a revolutionary reform risks some degree of dishonesty. Does everyone involved necessarily agree on the premises and goals of these approaches, and if so do they want their children to be among the first in the process? Is it necessary to explain the theories behind this to the students and parents on an individual level in order to affirm their consent? And if so, to what extent must they be informed? Or does it only need to be justified at a legislative, policy level in order to be considered as having been accepted by the public at large?

Evidently my greatest hesitation is in regard to public schools then, where students and parents are most likely to have disproportionately low access to resources, and therefore knowledge and capacity to become and remain informed about the circumstances of their education system— and the role of their children in the greater context of the development of education (which is to say, again, socialization). Economically precarious students and families are arguably those who most need pragmatic education, even ‘marketable’ education despite how much we dislike and want to do away with such terms. Can these students afford to forgo these more traditional objectives of learning in order to enact the revolutionary strategies of comparably privileged social theorists?

In a sense, public schools are the most effective, efficient way to streamline social reform on a mass scale. This makes them a desirable target to implement practices that are intended to induce wide scale change. But this also runs the risk of unfairly subjecting students who are maybe unwilling, maybe unwitting, but have no other realistic choice to something that can only ever be to some degree experimental. Because no amount of studies or theorizing can truly foresee how a policy will play out on a mass scale over the course of generations. And with something so intentionally drastic, so deliberately revolutionary, with such lofty goals that are described with near utopian language, these changes are not insignificant.

I am not against education reform— we always, constantly need education reform. But I am wary of the urgency with which it’s often spoken about, not just because the involvement of students is so delicate, but because it’s coupled with a kind of romantic idealism that’s averse to notions of pragmatism, seemingly on the basis that such notions threaten to undermine the theory’s revolutionary scope. But this is, as I’ve said above, the inherent risk of revolutionary practices. It’s important to ask though, and to keep asking, whether a revolution is taking place, or whether a revolution is being imposed.